Posted on January 5, 2017 by wsuvresearch

Dave Kim remembers the rainy day in 2014 when he was reading his students’ lab reports and just couldn’t take it anymore. “Their writing was very poor,” said Kim, associate professor and coordinator of mechanical engineering. “I thought they had learned to write in their first-year composition class. I called Wendy Olson, and that was our starting point.”

Olson, associate professor of English, is the director of composition and writing assessment and is in charge of first-year composition classes (English 101). “Faculty from all departments complain about their students’ writing,” she said, “but what was wonderful was that Dave asked, ‘What can we do to move forward?’”

They decided to investigate the writing practices of engineering students as they move from first-year composition courses into introductory engineering laboratory courses. In 2015, their research proposal received a National Science Foundation grant of $249,613 over two years. Kim is the principal investigator, and Olson and Praveen Sekhar, assistant professor of electrical engineering, are co-PIs. Sekhar is extending the curriculum design to electrical engineering students. 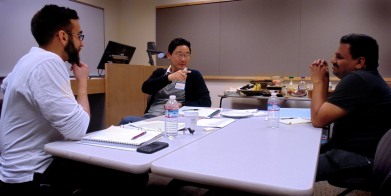 One challenge they discovered is that while students in English 101 may be encouraged to develop persuasive opinions, express themselves and use description, those rhetorical strategies are not appropriate in engineering lab reports. Engineers rely on data, experimental results and logical analysis. “You cannot show your own feelings,” Kim said. “Emotional appeals may be valuable in humanities, but they cannot be effective when the writer is trying to convince engineers as the readers.”

The researchers agreed, however, that there are commonalities in writing for any discipline: purpose, persuading an audience and structure.

“We found students were only doing persuasion and opinion in English 101 and only facts in engineering,” Olson said. “We said no, that’s not what we want you to do. Think about the need for evidence and facts in English 101, and the need for some persuasion in engineering. Even with lab reports, you’re addressing the whole context. They hadn’t been thinking about the audience before.”

In designing the curriculum for the project, Olson discovered two things: “I recognized the difference between how often you use secondary sources in some disciplines [such as English] but primary data in others [such as engineering]. Another big one was the role of visuals, such as graphs and tables. So I’ve been asking students to think more strategically about visuals and how to use them even in English 101. One of the big changes in English 101 [for the project] is that we moved up the research paper earlier in the semester, and then we follow with a genre project, which might be an academic poster, proposal or scientific poster. They take the research and create a genre that might be for a very different discipline and audience.”

Starting with their own students as they developed their approach, Kim, Olson and Sekhar transformed their classes to emphasize teaching for transfer across their disciplines, from English to engineering. Then they brought on additional colleagues from WSU and Clark College. “Nine professors are now using this new approach in their classes,” Kim said. “We assume it impacts more than 200 students at both schools.”

With the revised curriculum, Kim said, “Engineering students can make use of what they learn in English 101, but in an engineering context. They can see the continuation of writing from English 101 to lab report writing instructions.”

“It reaffirms for students what we talk about in English 101,” Olson said. “There’s no one-size-fits-all in writing. Your job as a writer is to be skilled in adapting to context and expectations.”

In their first-year report to the NSF, the researchers wrote: “Data collected in writing artifacts, student surveys, and a focus group show that curricular revisions to teaching lab reports reinforced students’ learning of rhetorical concepts from first-year composition courses, helped students to better understand the expectations of the lab report as a discipline-specific genre, and developed student’s understanding of the rhetorical features of writing in the discipline of engineering.” As they identify best practices for teaching writing skills that will transfer across the university, they will share them in the hope that other teachers of freshman composition may see the value in their approach.

The researchers have begun to disseminate their ideas through professional development workshops and in their respective professional organizations. They are planning a web page to open the approach to anyone.

Olson and Kim received a second grant, $10,000 from the Conference on College Composition and Communication, to study the writing knowledge of early-career engineers. Engineers spend from 20 to 40 percent of their workday writing, and Kim said the industry is calling for better writing from college graduates.

“There was a huge gap in what students were learning and what they would find in the market,” Sekhar said. “The project bridges the gap a little bit in student writing that will benefit them in the long run.”

“In a 21st-century engineering environment, it’s very common to have a collaborator in a different state or nation,” Kim said. “When I was working in industry, the manufacturing plant was in Hong Kong—no way could you have a simple phone call because of the time differences. You’d have to write an email. So I think students should understand how to write before they graduate in order to succeed at their jobs.”

This entry was posted in Writing. Bookmark the permalink.